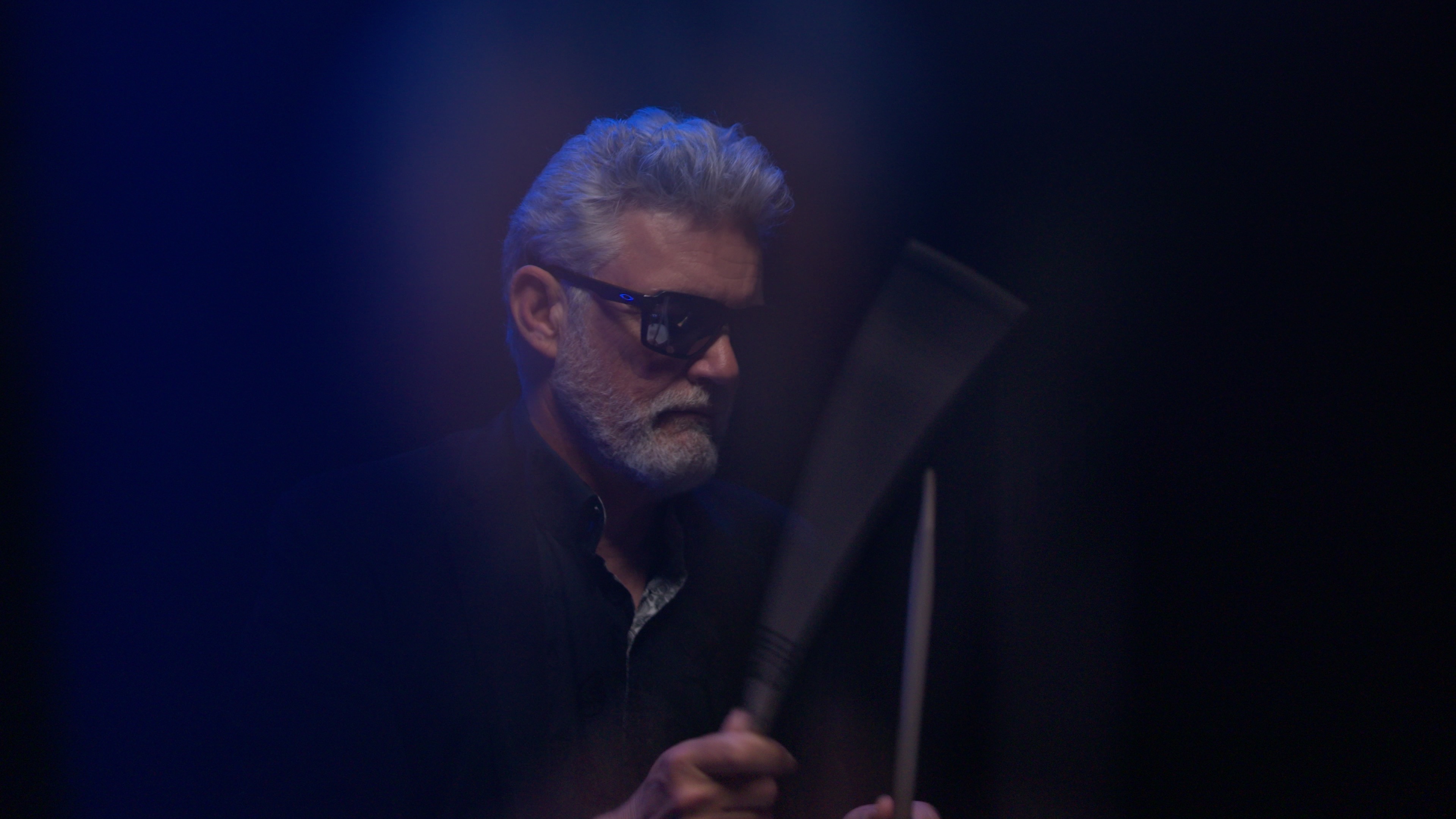 Paul was born in London on 12th June 1962 to Paul and Audrey Byrne who moved there from Dublin in the 50s. His father was an accountant who worked in numerous sectors including property and entertainment. He was a decent piano player but later he switched to the electric organ. Audrey was the all singing and dancing mum. Though she was made for the stage, marriage and emigration put paid to any career in that area. Her whole family were musical and get togethers involved everyone doing their party piece and Paul used to do a very sweet rendition of ‘Simon and Garfunkel’s ‘El Condor Pasa’ at age 7. Audrey’s father James Daly was a well known dance hall violinist who had his own band that played afternoon tea dances throughout the 40s and 50s in Dublin.

The Byrnes moved back to Dublin in 1969. Shortly after this Paul’s sisters Lorraine and Jeannette started performing at local shows and sometimes allowed Paul to sit in and play along with the snare drum he got for his 8th birthday while also chipping in with the odd vocal harmony. When he was 12 he got his first full drum kit which enabled him to start playing in the school variety shows and with the school jazz group ‘The Chanel Sextet’. It was run by his English teacher Fergus Shields who gave Paul his introduction to groove and improvisation by playing boogie woogie tunes like ‘Hony Tonk Train Blues’. From there Paul began jamming along with pop records by The Beatles, The Sweet, Bowie and others.

At age 15 he joined a band called ‘Mercury’ playing a lot of Thin Lizzy covers which were the staple of most northside Dublin rock bands at the time thanks to a legendary alternative disco called ‘The Grove’. It was at the Grove that Paul got asked to join Mercury and get his first taste of playing loud rock with an actual PA system and mic’d drums. They got to perform at the infamous ‘Peace Concert’ in Pheonix Park organised by the notoriuos ‘Legalise Cannabis Campaigner’ Ubi Dwyer. A young Dublin drummer from another local covers band ‘The Hype’ came along and helped him set up his kit that day. His name was Larry Mullen, a school mate of Paul’s punk rock neighbours Neil and Ivan McCormac. On occasion Paul was asked to sit in their punk band ‘The Modulators’. It was through Neil and Ivan that Paul discovered there was more to punk while learning off drum parts to Ramones and Buzzcocks songs. That knocked any remnants of jazz drumming out of him.

During this time Paul also qualified for and spent 18 months studying veterinary medicine but dropped out when he realsied firstly that it was a vocation he simply didn’t have and secondly that he always had a tune going on in his head during lectures.

After Deaf Actor’s, demise Paul and bass player Jack Dublin went on to form ‘In Tua Nua’ with some other local musicians Ivan O’Shea, Martin Clancy, Daragh Tanham and Steve Wickham. It was in pursuit of a singer that Paul came across the young 15 year old Sinead O’Connor. She was singing solo at his sister Jeannette’s wedding. Paul was so impressed that he spoke to her after the church rehearsal and arranged to meet up. The band co-wrote the song ‘Take My Hand’ with her and demo’d it in a couple of studios. Paul remembers borrowing a college friends car, picking her up after school, going to the studio, recording, and then driving her back to the convent home she was in before the nuns noticed she was missing. The band then found their singer in Leslie Dowdall and also brought in trad multi-instrumentalist Vinny Kilduff.

In Tua Nua’s debut single was the very first release on U2’s own ‘Mother Records’ label (mother001) and was an instant hit in Ireland. Following a brief signing to Island records, they were eventually signed to Virgin Records in 1986. The band toured extensively in Europe and the US as supports to U2, Simple Minds and Bob Dylan to name a few. The Bands first album ‘Vaudeville’ contained the hit single ‘Seven Into The Sea’ which featured a hard hitting ‘Deaf Actor’ style drum and bass groove which identified Paul and Jack as a rhythm section of some note. The band had their US breakthrough in 1988 with their second album on Virgin Records ‘The Long Acre’ on which Paul finally had his lead vocal debut on the title track. By this stage he had forged a writing partnership with guitarist Martin Clancy. Besides the title track Paul’s best known songs were ‘The Innocent and The Honest Ones’ and ‘Woman On Fire’ while he also co-wrote the hit singles ‘All I Wanted’ and ‘Don’t Fear Me Now’ with Martin and Jack.

When ITN broke up in 1989, Paul continued writing with his ITN co-writer Martin Clancy but this time Paul was singing all of the songs and they were free of the chains of trying to write for a celtic stadium rock band. The duo performed as ‘Sugar Candy Mountain’ and had an Irish top 20 hit with the Beatles like ‘Do You Know What Hurts the Children?’. Two songs from this period appear on Pauls album: ‘Walk a Mile’ and ‘No Fixed Destination’.
While all this was happening Paul also formed cow-punk outfit ‘The Texas Kellys’ with banjo ace Jimmy Kelly and fiddle player ‘Steve Wickham’ (who had just left The Waterboys). While he was primarily the drummer, Paul got to sing a lot more lead vocals with the Kellys and went on to produce their album ‘Stay All Night’ which contains Paul’s rendition of the Martin Clancy/In Tua Nua song ‘Jealous Knife’. Both bands broke up in 1993.
Around this time he started to work with Sean Loughman, better known as a certain Jack-L! Another friend, the pianist Brian Lynch had asked Paul if he would be interested in fronting a new show based on the Scot Walker versions of Jaques Brel songs. Paul didn’t feel he had the deep tones required but suggested they try out this amazing young singer Jack-L instead. The resulting band was The Black Romantics which also included Paul’s sister Jeannette on vocals. Being around the Brel show had a big influence on Paul and he started writing with Brian who had lots of new and interesting chord structures at the ready from learning so many Brel songs. Two of these songs were revisited for Paul’s album, ‘Your Love Is Heaven’ and ‘How To Come Back To You’.
In 1995 Paul helped Jeannette launch her own solo career by producing her album ‘Elegy’ which featured some of his own original songs and later produced her second alum ‘Café Diva’. More recently he produced her new show ‘No Regrets – The Music of Edith Piaf’ which is touring around Ireland.
In the late nineties Paul joined multimedia firm ‘Oniva’ as a sound producer and was trained as a video editor. In 2001 he formed his own company ‘Optophonic’ along with composer and multimedia guru Derek Cronin. The idea was to combine their video and music skills under the one roof. Along the way they also created Phonic Recording Studios with Paul’s old friend from Deaf Actor Conor O’Farrell Brady and finally the I-NV-U Record Label.
In late 2004 Paul reformed In Tua Nua for a small Irish tour and they are still performing to this day. In 2005 he joined the newly reformed ‘Rocky de Valera and The Gravediggers’ with Jack Dublin for a short stint that ended up lasting for 4 years during which they released two singles, both produced by Paul.
In 2009 Paul decided to help out with some young bands from his hometown of Howth. He produced albums and an EP for Von Shakes and The Kapitals respectively which he released and promoted on I-NV-U Records.
Later in 2009 Paul was asked to form a new band with the legendary Shane McGowan entitled The Shane Gang with Jack Dublin on bass, Johnny Daly on Guitar and Sarge on keys. They played gigs sporadically and it only lasted 2 years but from it came The Guilty Party, one of the best pub rock and party bands on the scene, where Paul does his best Levon Helm impression as their singing drummer. The Guilty Party (with the addition of Conor) are also now Paul’s touring band for his album.
After a lifetime of writing, producing, managing and generally helping out the careers of others, it was time for Paul to come out of the shadows. So in late 2013 he decided to put together a collection of songs and record them with the help of Conor. The resulting album is titled ‘Cruel and Tender Ways’. The songs span the last 25 years but the first single is one of Paul’s most recent compositions ‘I’ve Got You’.

In 2014 Conor was producing an album for Stars of Heaven frontman Stephen Ryan and as Paul was in the next room they asked him to play drums. The result was a new band ‘The Drays’ and the result was the highly acclaimed album ‘Look Away Down Collins Avenue’. Paul has been working on a new album with The Drays since 2018. It was due for completion in 2020 but you know what happened next. Keep an eye out for their next release.

In 2018 Paul was asked to join a band with the highly respected songwriters Nick Kelly and Sean Millar called The Unelectables. Also in the band are bassist/producer Leslie Keye and pianist/composer Daragh O’Toole. They played Electric Picnic in 2018 and 2019.

Also during this time Paul was one of the chief organisers (along with Keith Geraghty, Eugene Connolly and Eoin Kellett) of a series of annual charity shows at The Olympia Theatre, Dublin. Entitled ‘A Night For’ they ran from 2015 to 2019 and supported Pieta House and Aware. Special guests included In Tua Nua, Christy Dignam, Jerry Fish, Mundy, The 4 Of Us and many more.

During lockdown Paul continued working on songs and recordings, using samples and synths to create his backing as conditions didn’t support working with a band. The first fruit of this time is due for release on 11-11-22 in the form of his latest single ‘FUH (I Can’t Stop Falling). Fuh was the word Paul McCartney famously used instead of Fuck in his song Fuh You…you get the picture!

Between 1977 and 1981 Howth had a thriving music scene and for such a small fishing village on the outskirts of Dublin it produced a great variety of bands. Here’s a little bit about them and a little about what some of the members went on to do.

The Dark (who became The Spies) – 1978-80
Joey Barry (vocals) – formed Above The Thunderclouds and then joined Thee Amazing Colossal Men who became Compulsion with Garret Lee.
Gerry Leonard (guitar) – formed Above The Thunderclouds and Hinterland. Went to the USA where he works with Suzanne Vega and David Bowie.
Peter Leonard (guitar)
Alex McGrath (bass)
Gerry Daly (drums)

The Modulators/Yeah! Yeah! – 1978-83
Neil McCormack (vocals) – Moved to London and formed Shook Up, wrote ‘I was Bono’s Doppelganger (which became the film Killing Bono) and works as music critic for The Telegraph.
Ivan McCormack (guitar) – Moved to London and formed Shook Up, has a very successful wedding band in UK.
Declan Peat (bass)
Leo O’Regan (drums)
Paul Byrne (Occasional drums including support to U2 in Howth Community Centre)